Quantum memory: making the most of a precious resource

Our current information technology is based on classical bits, basic units of information that can have two states, either 0 or 1. All the information stored into our computers, from emails to photos and videos, is encoded into combinations of millions of zeros and ones. 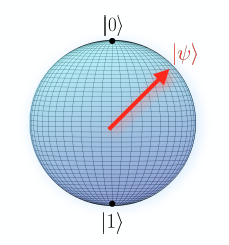 Figure 1: the states of a quantum bit. A quantum bit has infinitely many states, corresponding to points on a sphere. The classical states, 0 and 1, are just the North and South poles of the sphere. Any other point is a valid state of the qubit.

With more states at disposal, the qubit offers more opportunities than the classical bit. A spectacular example is secure communication: using qubits, two distant parties can communicate secretly, with the guarantee that no one else can eavesdrop their conversation.

When many qubits are combined together, even more states pop up, offering an exponentially large space where information can be processed in radically new ways. Maneuvering in this space, quantum computers can beat our best supercomputers in a variety of tasks.

Still, the number of qubits that can be fully controlled with present technology is severely limited. In the short term, we expect to see prototypes of quantum computers operating on about a hundred qubits, or a few hundreds at most. The key question is: what can a quantum computer do with such a small amount of memory?

At HKUCS, an interdisciplinary team led by Giulio Chiribella, Associate Professor and CIFAR-Azrieli Global Scholar, is studying how to make the most of the first, small-size quantum computers. Since the bottleneck is the quantum memory, the team is looking for strategies to run computational processes on the smallest number of qubits.

Figure 2: compressing a stream of identical particles. As a new particle arrives, the information carried by the particle is stored into the memory of a small quantum computer. In this way, an input of stream of N qubits is squeezed into an output system of 3/2 log N qubits, with an exponential reduction of memory space.

In a 2016 paper, published in Physical Review Letters, the HKU team found the best way to compress information under the constraint that certain quantities, such as energy or angular momentum, should be conserved. Shortly after, they found that the ability to circumvent the conservation law reduces the memory even further, reaching the ultimate compression limit set by quantum mechanics. This work, also published in Physical Review Letters, was done in collaboration with Professor Masahito Hayashi from the University of Nagoya and the Centre for Quantum Technologies of NUS, Singapore.

The team is now studying the applications of quantum compression to quantum clocks and quantum sensor networks. For clocks, the goal is to efficiently store time information, realizing a quantum-enhanced stopwatch that can be paused and resumed on demand. For sensor networks, the goal is to reduce the amount of resources needed to transfer information from one node to another, enabling the realization of ultraprecise measurements in large, distributed systems.

Figure 2: schematic of a quantum sensor network. The data collected by multiple sensors is transferred from a node to another, and eventually to a base station, where the different pieces of information are combined and processed together. Quantum compression reduces the amount of resources (communication, entanglement, and memory size at the base station) used by the network.

In view of these applications, it is also important to study realistic scenarios, where the compression operations and the other computational steps are subject to errors and hardware imperfections. To address this problem, the team is now developing quantum benchmarks that can be used to control the quality of new quantum devices in realistic experimental conditions. Future directions of research include the design of quantum learning machines equipped with a small internal memory and to tackle the simulation of quantum systems with bounded-size quantum simulators.

Aram Harrow, Why Now is the Right Time to Study Quantum Computing, XRDS Crossroads, The ACM Magazine for Students 18, 32 (2012).